Today on tour I stopped by Lock That Door!   Instead of more info about me, you can get to know Callie Champlain, who you’ve met in Office Plays and who will be in my next Adults Only book, Room Service (coming soon!) Callie is one of my favourite characters and I hope you learn to love her as much as I do, because you’ll be hearing a lot from her in Room Service!

Where do you dream of traveling to and why?

Well, right now, I’m looking forward to heading to Nova Scotia. There’s a bed and breakfast there that caters to more adventurous adults and I’m due there next weekend! Should be fun! Other than that, my travels take me to places where there’s warm weather, beaches with hot boys and lots and lots of fruity cocktails!

What do you think makes a good story?

Tell us about your family.

My family. What do I say about my family? First of all, my father would have preferred me to be a boy. He really had no idea how to raise a daughter, especially my mother left. I was twelve when she took off. Not a great time to be motherless. But my dad did the best he could, and my brothers helped. They were the ones who told me about sex, which probably explains a lot.

I’ve been told that I act more like a man than a woman when it comes to relationships. Or maybe the reason I don’t have relationships. I don’t see the point, since you always end up hurting someone. Or yourself. Anyway, I’m sure my brothers weren’t the best example. Or my mother, the little I knew of her.

What was the scariest moment of your life?

Until last year, the scariest moment was realizing my mom had left me behind, and wasn’t coming back. But telling Michael I loved him beat that out.

Neither turned out well.

What group did you hang out with in high school?

I was a cheerleader in high school, can you believe it? So, I guess I hung with the popular kids, the football players, and the mean girls. They were mean, too. I tried not to be, but I’m sure I had my moments.

Do you play any sports?

If you could apologize to someone in your past, who would it be?

Robby Hughes. I was not very nice to him when he asked me to prom. But I friended him on Facebook a couple years ago, and the years have been very good to him. That saying about the geeks ruling the world is totally true! I wouldn’t mind a face-to-face with Robby to really make it up to him. 😉

Who should play you in a film?

Ooh, good question!  We played this at work one day – who would play up in the sitcom version, but film is better. I’d love to say Margot Robbie because I think she could handle my sass, but there’s really not enough of her to handle all of me.  Maybe Sofia Vergara, if she was a blonde.

What would we find under your bed?

(She gives a ribald laugh)

A man? At least something he’s left behind. Whoever he may be. 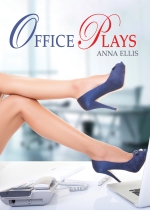 And get to know her even more in Room Service, the

second book in the new Adults Only series. Available early 2018